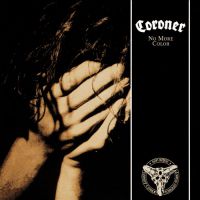 Coroner's third album in as many years continued the band's rapid evolution in style and offered some much-needed improvement in production values. While hardly their best-produced recording, No More Color has a cleaner, crisper sound quality than its predecessors and contains what was easily the group's finest songwriting up to that point. In their continual quest for perfection, the band further honed their craft, bulking up their sound while continuing to experiment with unusual time signatures and jazz-like chord progressions. It's interesting to note that unlike so many bands who attempt to streamline their songwriting, Coroner is one of the few groups to greatly benefit from the process. "Read My Scars" is

an excellent example of this. A textbook lesson in dynamics, the song exhibits breakneck tempo changes and swirling instrumental passages within the confines of a relatively simple (but highly memorable) main riff. As journalist Steffan Chirazi noted at the time, "Coroner display a healthy ability to grab hold of parts that don't really make too much sense as separates and turn them into superb, rolling compositions. This band has every right to be as big as Slayer." Sadly, that level of success would never happen. But Coroner would continue to develop their work and quietly take their place as one of the world's most innovative and underrated bands.