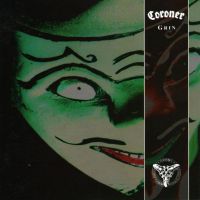 Tracks 1 and 7 are instrumentals.

Grin, the last Coroner album of all-new material to be released, was simultaneously the culmination and transformation of everything the band's first four albums had achieved. Fearlessly experimental, challenging, and "heavy" in a way that goes beyond mere sound, Grin has stood the test of time to emerge as Coroner's ultimate statement. It is a recording of astounding musical power, the conjuring of a ferocious, intangible force that the musicians have created and are battling to control. Even the album's more sedate passages ("Dream Path"; "Theme for Silence") seem afflicted with an underlying anger and tension. The music is like a living thing, snaking outward in a patient search to discover itself before

moving in for the kill. When a positively vicious-sounding Ron Royce snarls "Nails in my brain, NAILS HURT!" his statement comes off as something more than just another fussy metaller declaring his vague angst; it leaves one with the feeling that the vocalist has tapped into that dark, primal side of himself that all of us possess... and do our best to keep buried. Taken as a unified statement, the songs on Grin would seem to be about just that--the struggle of mankind with his primitive instincts, trying to make sense of the artificial and often brutal society he has fashioned for himself. This is of course a universal concern, one that affects even those not consciously aware of it, and the importance of this can't be overlooked in relation to Grin's impact on the listener. Many of the best albums in rock history are those that take us on an emotional journey while examining the human condition: Dark Side of the Moon, Tommy, OK Computer. Grin is just such an album. That it has never received its due from the music establishment or a wider audience is truly an injustice. But then, for many, confronting what lies within is simply too much to bear.