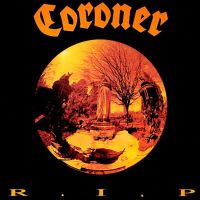 While somewhat less focused and mature than its successors, Coroner's first full-length album remains essential listening not only for the group's fans, but for all who like their metal to go down fast, slippery and blistering. Coroner virtually reinvented the boundaries of late-Eighties speed metal on R.I.P., with Tommy T. Baron's fluid riffs and leads soaring above the jazz-influenced bedrock of Ron Royce and Marky Marquis' rhythm section. Despite lackluster production values, the album is rich and varied in textures, making excellent use of keyboards and acoustic guitars to create a mood of genuine dread that few bands can match. The kickoff track, "Reborn Through Hate," was an instant fan favorite and a concert

mainstay throughout Coroner's career. R.I.P.'s lyrics occasionally leave something to be desired (especially a lyric sheet!), but Marky Marquis would address this flaw on later releases. Without question, this is one of the strongest debut albums any band has ever unleashed--and things would only get better from here.