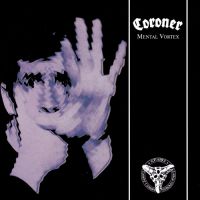 The first Coroner album for the Nineties represented a turning point--if not in terms of commercial success, then certainly in the artistic sense. Having fully proven their mettle as outstanding technical musicians, Coroner now presented their audience with a collection of leaner, more riff-oriented compositions. The songs on Mental Vortex manage to retain all the best elements of the band's previous work while also making their music more accessible to a potential larger audience. No small accomplishment, and it's a testament to Coroner's creative prowess that fans not only embraced this progression, but many still consider Vortex to be the best album of the group's career. Unquestionably, the disc features Royce, Baron and

Marky at their tightest, a seasoned 3-piece unit functioning as one. The results are striking, not only due to the songs' relative simplicity, but because of the clean, polished sound quality the album boasted. Finally, a Coroner album had received the production and engineering it deserved! With the combined strength of seven original works, plus a bombastic rendition of the Beatles' "I Want You (She's So Heavy)", Mental Vortex proved to be Coroner's finest hour thus far. For fans, the only spot of darkness was to worry if the band could ever top this release. Two years later, the answer to this question would amaze us all...